The Top 10 Must-Try Concession Foods in the NFL

After rumors of a delayed start and even outright cancellation, the NFL season resumed on September 10. And while most fans enjoyed the start of the season from their couch, some NFL stadiums allowed a limited number of fans to attend in person. Attendees were required to wear masks and practice social distancing while watching the game, and concession stands were still in full swing.

There’s something about visiting a sports stadium that makes us instantly hungry for something sweet, salty, or greasy. And with the cost of attending an NFL game now over $350, fans expect more than just “stadium food.” Food has become an integral part of the stadium experience.

To satisfy hungry fans, concession stands have become increasingly more gourmet with their food offerings, even competing with one another to create the best stadium food. Peanuts and hotdogs have been replaced with full course entrees and a wide variety of menu options, such as lobster rolls, Kobe beef burgers, ceviches, chicken fried steak sandwiches, and quinoa salads. Levi’s Stadium even employed a Michelin-starred chef to create their game day menus. So, who exactly has the “best of the best” food options for football fans?

Culinary Trip Across the NFL

The sheer variety of menu options have us wondering about the “best” food around the NFL. What are the absolute “must-have” concession foods that are worthy of a trip.

To chart out which stadiums had the best food prior to the 2020 season, our team reviewed hundreds of NFL menu offerings to determine which looked as appealing as a game-winning field goal. Check out our scouting-report. 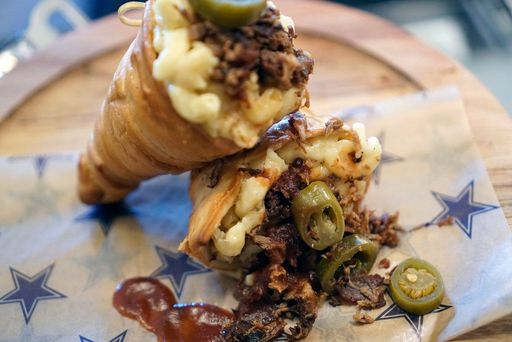 We’re starting off our culinary adventure in the Dallas/ Fort Worth metroplex, home to the Dallas Cowboys (and ACE Cash Express headquarters). What do Texans crave? Barbeque, of course! In 2018, the Cowboys released the mac and cheese brisket cone. The fresh-baked cone contains Cowboys mac and cheese, freshly chopped brisket, signature bbq sauce and spicy jalapenos. The handheld factor makes this concession snack an on-the-go masterpiece and frees up your other hand for high-fiving after a touchdown. 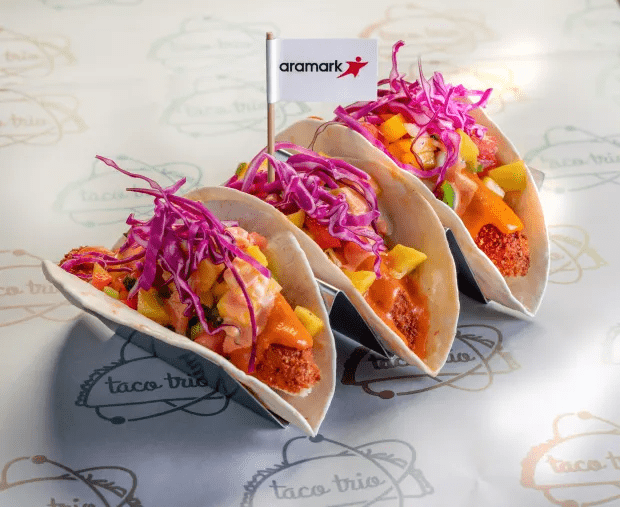 A short drive south takes you to, Houston (home of the Houston Texans). For those craving tacos (and let’s be honest, who isn’t?) the Houston Texans created the Battle Red Tacos in 2018. What makes them unique you ask? Well, this trio of tacos comes filled with tenders battered in Flamin’ Hot Cheetos and covered in Sriracha mayo. While they may not be for the heartburn prone, they sure do look delicious. 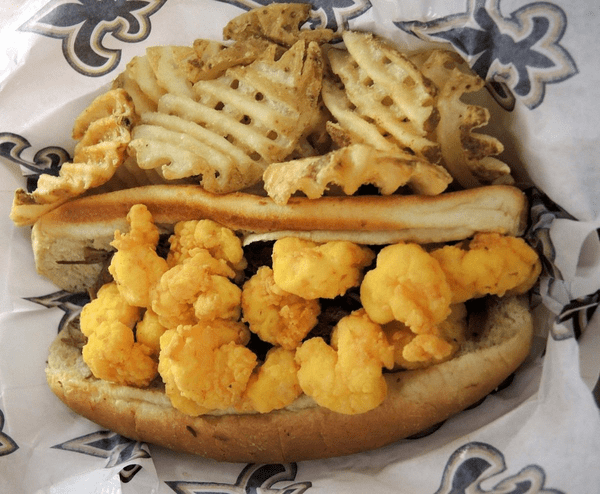 In New Orleans, the Saints are cooking up something special - The Black and Gold Po’ Boy, named after the team’s iconic colors. But this ain’t your grandma’s po’ boy. The Black and Gold sandwich features fried shrimp AND roast beef debris, along with various veggies and the sauce of your choosing. This sandwich is best enjoyed Bayou-self. 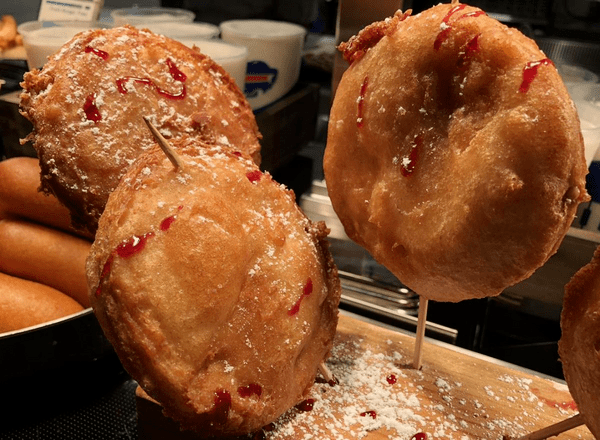 In 2018, the Buffalo Bills gave everyone’s favorite childhood snack a major makeover. This peanut butter and jelly sandwich is hand-dipped, fried golden brown, dusted with powdered sugar, and served on a stick, for even more fun. The fried peanut butter and jelly was inspired by a team executive visiting the Erie County Fair and noticing the ease of handling food with one hand. The team then began testing their own handheld food item, experimenting with PB&J recipes. 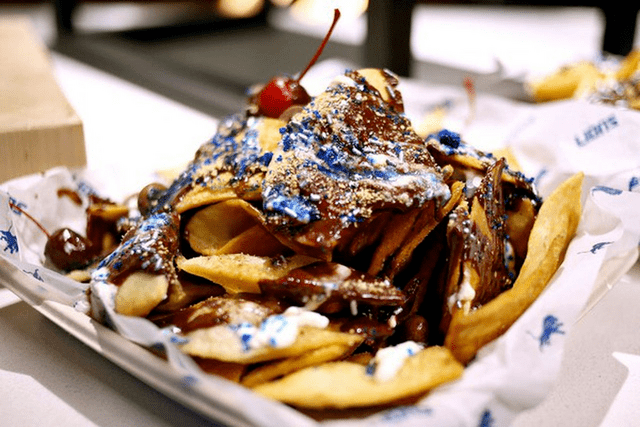 Stadium nachos are an iconic, shareable food that pairs perfectly with watching the big game. In 2018, the Detroit Lions premiered a fun twist on this classic - dessert nachos. We know what you’re thinking, and no, there’s no cheese involved. Instead, this dish has cinnamon-sugar dusted chips, a Nutella chocolate sauce made with Marshmallow Fluff and Snickers, graham cracker crumbles, and Michigan sour cherries to balance the extreme sweetness. 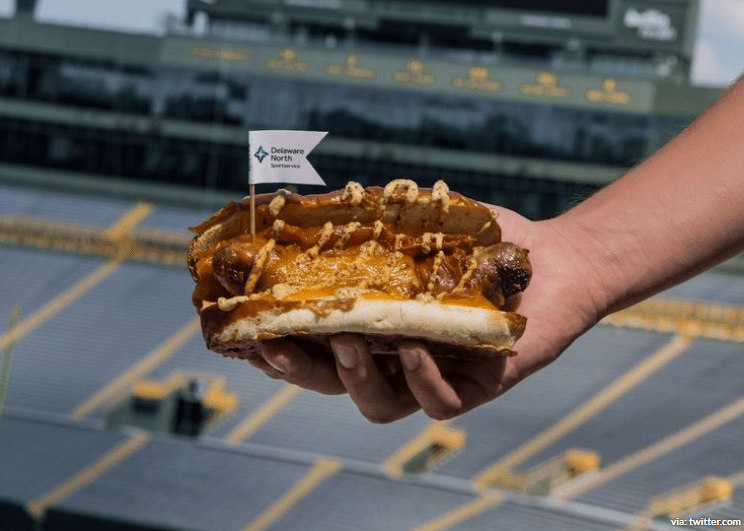 Cheese curds. Wisconsin. Is there a better dynamic duo in food history? For the 2018 season, the Packers served up the brat-in-a-blanket, a sandwich containing a brat wrapped by melted cheese curds, topped with beer mustard and served on a toasted pretzel bun. 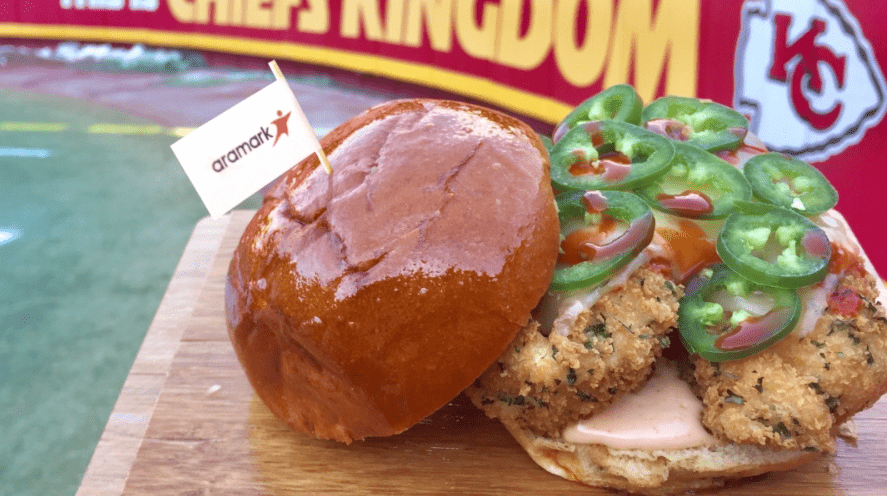 A staple in Missouri, the Kingdom Inferno sandwich features crispy chicken tenders cooked to perfection along with Carolina Reaper pepper mayo, pepper jack cheese, sliced jalapeños, and buffalo sauce on a brioche bun. Now we know why Chiefs fans are cheering so loudly. 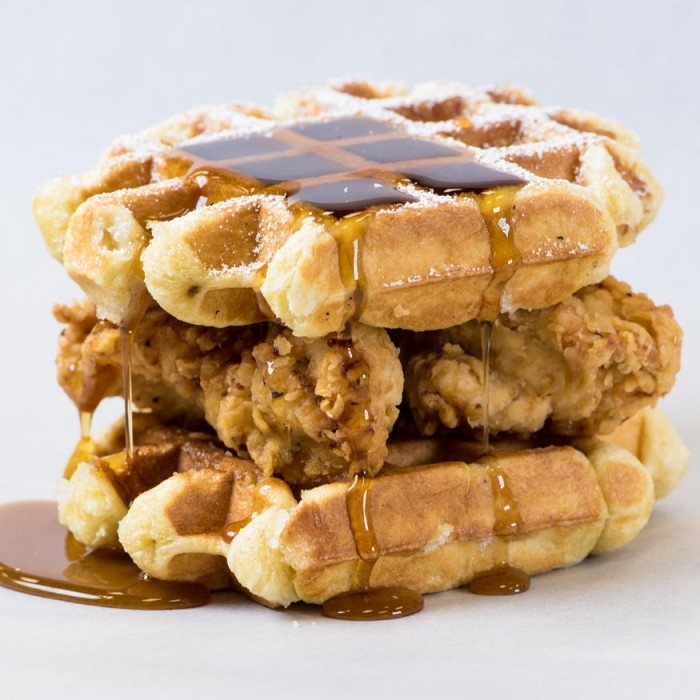 As if there weren’t enough reasons to love Seattle already, Seahawk fans were treated to a Chicken & Waffles Sandwich in 2019. This instant-favorite starts with two sweet iron waffles nestled around crispy fried chicken tenders. Naturally, there’s bourbon-barrel maple syrup in the middle, to make this the perfect comfort food.

For 49er fans looking to fill up while feasting their eyes on the game, this sandwich is a perfect option. During the 2018 season, the 49ers debuted the Dungeness Crab Pretzel, another whimsical twist on a stadium classic, the soft pretzel. Seeing a pattern here? This sandwich featured fresh crab meat mixed with garlic aioli, Dijon mustard and chives, all served on a freshly toasted pretzel baguette. As unlikely as this pairing sounds, we’re always down for some delicious seafood! 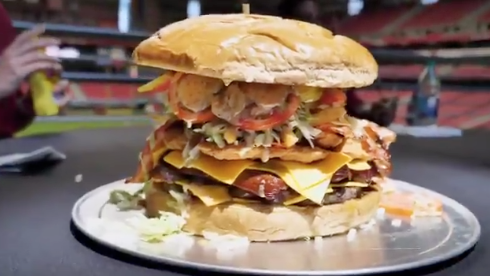 Fans hungry enough to finish the entire burger in under an hour were rewarded with a personalized Cardinals jersey and shoutout on the video board during the game. Feels like fair compensation for a food coma-inducing burger.

Buy Me Some Peanuts and Cracker Jacks

Now that you know what we think about the best concession foods in the NFL, it’s time to get out and try them! We’ve prepared a handy road trip map to help you chart out your culinary journey. But keep in mind, in order to try all of these great foods, you’ll have to travel 116 hours, 7,500+ miles and cross 23 different states.

One last thing before you start packing your suitcase. It’s also important to remember that these menus change yearly and sometimes during the season, so our entire list may not be available for the 2020 season. It’s best to check each stadium’s menu online once. Here’s hoping you’re able to try them all.

The Evolution of Video Game Genres: From Pac-man to Fortnite

Still think gaming is for kids? Well, you’d be wrong…

The Most Popular Breads in the U.S.

As we all have been spending extra time at home, we’ve seen some unique trends surface, including...