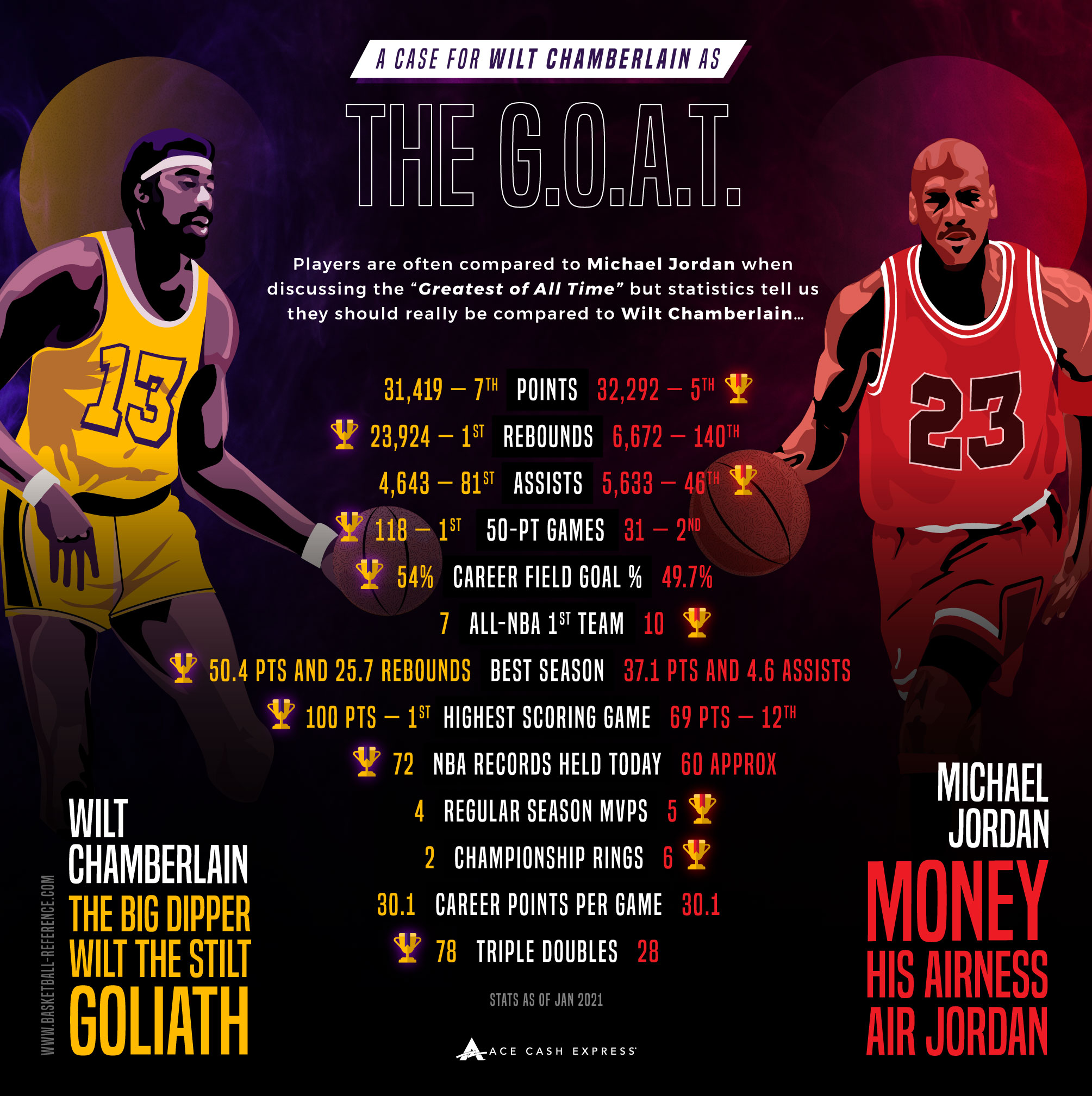 A Case for Wilt Chamberlain as the G.O.A.T. (Over MJ & Lebron)

It’s the greatest fan debate of all-time: Who is the G.O.A.T., or the “Greatest of All Time,” basketball player in the history of the NBA? Other sports leagues seem to have a much more definitive answer to this question. For hockey, it’s Wayne Gretzky. For baseball, it’s Babe Ruth. But for basketball, most fans are divided between Michael Jordan or Lebron James.

There are certainly G.O.A.T. arguments for both Jordan and Lebron, and you wouldn’t be wrong lobbying for either of them. However, we feel strongly that not only does another player belong in the conversation, but probably wins the title if you look at the stats.

A seven-foot, one inch, “Goliath” who fundamentally changed the way basketball was played. A player, so feared at the time, that newspapers wondered if “basketball could survive.” A player whose NBA records are so unbreakable, that many still stand 55 years later.

We’re of course talking about the great Wilt Chamberlain.

Everyone defines the criteria for Greatest of All Time differently. Some fans value the number of NBA championships, while others care more about statistics. The truth is, there is no precise definition for greatness, so how do we rate the greats? In our eyes, the G.O.A.T. must meet several criteria.

A G.O.A.T. player should be utterly dominant during their era of the NBA. That means that the individual awards like MVP, All-NBA 1st Team selections, All-Defensive Team selections, scoring titles, assist leaders, or rebounding titles should count when discussing the G.O.A.T. It also means the player should have a “prime” that lasts a relatively long period of time. For example, Bill Walton is among the best to ever play, but he did not play nearly enough seasons to be in the discussion of Greatest of All Time.

Players should have the records to back up their claim as the G.O.A.T. They should be among the all-time leaders in either scoring, rebounds, or assists. Other NBA records, like “most 50-point games”, also strengthen their case.

A G.O.A.T. player should have a well-rounded game and be just as good at defense as they are at offense.

Individual accolades are nice, but without winning it all, it’s hard to argue that player is the greatest. The G.O.A.T. should have multiple NBA championships under his belt. We also feel strongly that the number of NBA finals appearances should be weighed.

Now that we know what greatness looks like, here’s why we think ‘Wilt the Stilt’ should have fair consideration for the G.O.A.T.

Nobody Ever Roots for “Goliath”

During his prime, Wilt Chamberlain was nearly an unstoppable offensive player. He was a big man that could get to the hoop and score at will. He could score by dunking, posting up, or with fadeaway jumpers. He was the complete package on offense.

Wilt was a gifted athlete and was able to bench press 500lbs and run a 100-yard dash in 10.9 seconds. He even holds the NBA’s highest vertical ever at 48 inches off the ground. Again, he did this all at 7’1”.

His athletic abilities are even more incredible when you consider that Wilt Chamberlain did not have access to the modern weightlifting, training, or dieting that athletes today have.

Wilt Led the League in Scoring as a Rookie

As a rookie for the 1959 Philadelphia Warriors, Wilt made an immediate impact in the league and became the highest paid player at $30,000 per year. In his NBA debut, he scored 43 points and grabbed 28 boards. He went on to average 37.6 points and 27 rebounds per game for the rest of his first season and won both Rookie of the Year and MVP honors. For his first seven seasons, he led the basketball league in scoring.

Wilt Scored 100 Points in a Game

Wilt’s most notable NBA achievement was scoring 100 points in a single game - the most ever by a player. He accomplished this feat without the help of a three-point line, and with 28 free-throw shots, meaning Wilt had to score 36 buckets in 48 minutes to reach this milestone. This record stands so far above second place (Kobe Bryant with 81 points) that it will likely never be broken in our lifetime. In comparison, Michael Jordan’s single game high was 63 points and Lebron James’ game high was 61 points.

Wilt also has the most 60-point games ever by a player, at 32 games. Michael Jordan has four, and Lebron James has just one.

Within the same season that Wilt averaged 50 points per game, he also averaged 48.5 minutes of play per game. You’re likely wondering how could he play more minutes than there are in a 48-minute game? Well, that’s because his Warriors team played ten overtime periods that season, and he played all of but eight minutes of that season. Wilt was certainly one of the most conditioned and durable NBA players ever. In a modern NBA league that “rests” players more often, Wilt would have likely played for many more seasons.

Wilt Led the League in Assists

Becoming the best scorer of all time wasn’t enough for Wilt. After being labeled “selfish,” Wilt added another skill to his game - passing. During the 1967-1968 season, he averaged 8.6 assists and became the league leader in passing. He is the only player ever to have led the league in scoring, rebounds, and assists at some point in his career.

During his 1972 title run, Chamberlain helped the Lakers achieve a 33-game winning streak. This is the longest winning streak in the history of the NBA.

Wilt Averaged 22.9 Rebounds per Game During His Career

As extraordinary as Wilt Chamberlain was as an offensive player, he was equally gifted on the defensive end. During his career, Wilt averaged 22.9 rebounds per game, and finishing as the all-time leading rebounder at 23,924 boards. His NBA record of 55 rebounds came against Bill Russell and the world-champion Boston Celtics, as did a 43-rebound game.

In the 1,045 games that Wilt played, he never once fouled out. This absurd stat was achieved while playing heavy minutes every game.

Wilt Would Likely Be the All-Time Leader in Blocks

Unfortunately, shot blocks were not counted by the NBA until the 1973–1974 season, which is a full year after Wilt retired. However, game log data for the 112 games in which Wilt played was recently discovered. In those games, he averaged 8.8 blocks per game, which is unbelievable. Some of this data is from his later years in the league, when Wilt was 35-36 years old, and shows just how much impact he had on the defensive end. If the NBA had recorded shot block data sooner, Wilt would almost certainly have shattered the all-time blocks record.

Despite all of his individual accolades, the teams for which Wilt played did not see much postseason success. He won only two NBA championships—one with the Philadelphia 76ers in 1967 and one with the Los Angeles Lakers in 1972.

The biggest reason he didn’t have more titles was because of the Boston Celtics. Led by center Bill Russell, and a team stacked with all-stars and future hall-of-famers, the Celtics won eight titles in a row before Wilt put a stop to their streak in 1967. In total, the Celtics would win 10 championships during Wilt’s career.

Before Michael Jordan, Wilt Chamberlain was the consensus pick for the G.O.A.T. Nowadays, you’re lucky to hear Wilt’s name in the conversation. Instead, fans and analysts focus on Jordan and Lebron because of their championships and impact on the game. But statistically, Wilt Chamberlain beats both players in nearly every category. Let’s take a look at some key stats for all three players.

Michael Jordan and Lebron James may have put up more championships, but we would argue that Wilt won championships by himself. During his career, Wilt’s best teammates were Jerry West, Hal Greer, Gail Goodrich, and Elgin Baylor. All were hall-of-famers, but only Jerry West and Elgin Baylor could possibly be considered among the top 50 players of all time nowadays.

In comparison, Jordan’s best teammates were Dennis Rodman, Horace Grant, and of course, Scottie Pippen. Scottie Pippen is regarded by some as the most dominant defender of all time. Others put Dennis Rodman as the best rebounder of all time. James has played with even more future hall-of-famers in his career, including Chris Bosh, Dwayne Wade, Kyrie Irving, Ray Allen, and Anthony Davis.

No matter what era he played in, Wilt Chamberlain likely would have dominated. He was a once-in-a-lifetime athlete, the greatest rebounder ever, and one of the most prolific scorers ever. Because of that skill, he still holds 72 NBA records today, 68 of which are individual. So, next time you’re discussing the G.O.A.T., make sure you include Wilt Chamberlain.

57 Years of Black Widow: Her Origin and Abilities Explained

The upcoming 2021 Black Widow movie promises to shed light on the checkered past of Natasha Roman...